Its all About The Bike 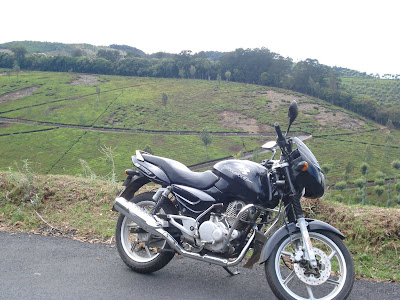 A Good friend of mine once said " 4 wheelers move the body , while 2 wheelers move soul". Someone like me who's only dated 2 wheelers in too much of an obsession would instantly identify with these lines. While 4 Wheelers are tagged with luxury,temptation and speed of course, 2 wheelers on the other hand share a greater identity .They represent Freedom, Breaking away, the wind, Adrenaline rush, They're all about Manhood and celebrating the same.

Lemme take a small example to Bring the contrast between the 2 of these modes of land travel. you have a guy nicely dressed in silky bright Formal Attire driving his Merc, and on the other Hand there's this Guy driving his Bullet 350 with a heart thumping noise, dressed up with his leather jackets and gloves. Whom you wanna watch??...For me though , I always wish i could be the latter guy. It makes me wanna branch out from the usuall and experience the sheer experience of Cross roads and Off country Biking.

Now to talk about my biking experience, I was lucky to get a Bike too early in life.That was in my PU days, I owe my parents a lot for this. When many of my friends around me were happy driving a honda Activa, peps and kinetics , one fine day i suddenly landed with a PULSAR DTSI 150. Previous to which i was zooming around in a bajaj Chetak of 1987 model, The scooter which my dad used. Its pick up of course was on full throttle,Other notable feautres included Hand gear, Fill Oil when you fill petrol, returned a mileage of 35km every ltr, Tyres having completely gone bald gave me enough room to try skidding, and all sorts of stunts that i felt capable off.

To talk about Pulsar 150 , the model is in immense demand ever since then, Constant upgradation and timely variants have given Bajaj a unique Brand Value. Although it isn't comparable to the kind of experience a Royal enfield would give you on road, but i'd still rate it high cos it was a complete package.

Its been 6th year successfuly that i've riding my bike and i don't have a single Complaint, bearing some minor itches here and there, like for instance a guy like would always feel why aren't bikes much more taller??.

Some of the memorables that i'd wanna recall here,

1. My chemistry Sir in the PU tutions intially felt that i was a spoilt brat who just unecessarily got a bike and would go down in the PU exams because of this. Later i scored a 100

2.The days of CET councelling, probably some of most carefree and joyful. The best days in my life. The arguments between Govt and the Colleges wouldnt settle and the councelling wouldnt happen. So this bought us ample time. Frequent MG road atleast thrice in a week to catch up on all the latest movie flicks(This was in Symphony, My favourite theatre, front rows, 50 Bucks) Bowl at Amoeba, play Games, Collect a lot of coupons and eventually exchange them for dolls. Bike ensured a 25 mins Transit time between MG and home.

3.The 4 years that followed into engineering was split between 2 years of BMTC just to be more responsible, what i mean is economical and the last 2 years the bike had to be pulled out due to irregular timings and increased travel time with buses.

4.Occasional trips outside the city along with friends in the college had also had a part into my biking diaries

5.The recent past has seen a couple of long biking trips out of bangalore, the one worth mentioning is the 1 men army trip taken to Ooty and a host of places around.
Managed to knock around 900 kms on the trip spanning 3 days.
It is during this trip i had some memorable experiences driving around the steep curves of Cunnoor, The lonely Roads of BRT Wildlife Sanctuary. The buzzing roads of Bandipur and Madumalai. not to forget the 45 odd Hairpin curves of masinagudi Ghat
.the one thing to wind these all would be the Drive back home on the mysore bangalore highway that goes fully crowded on a sunday evening. Ripping at 80-100kmph, squeezing between vehicles, maintaing bumper to bumper distance.The Sudden throttle. these are some of things that can bring in your adrenaline rushing


I could take more about my bike, but i shall hold the rest of the space for an equally interesting vehicle. Not that nobody knows about it, But we have forgotten. Some of the precious and fond gifts of our Childhood is left unattended rusting in our Attics.I had a similar story not untill long i discovered what a vehicle i had been missing riding all these days

No registration Number,
No Licensce
No Helmet
No Documents, Insurance
No Fuel
No maintanence

Yeah , A Cycle needs a desperate foray back into our lives, like never before .Thats the need of the hour.