BRAHMAGIRI- "the walk in the clouds" 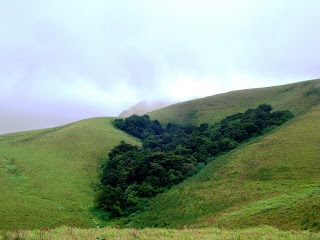 Day2:Reach Virajpet, Ponnampet, gonikoppal and finally Srimangala
Finish breakfast at Srimangala, The places houses a couple of small restaurants, they’re non-veg by default. So vegetarians will find it difficult to digest their piece of meal at this place. It is here where the trekking flags off. The permission for trekking, camping and the charges for the forest guest house costed a whopping 7k Rupees. The Lkshmana Theertha River plunges in cascade from a great height at this place.

The initial trial takes us through a lot of bamboo bushes. The leaches that were the prime concern throughout the trek had already started getting attached to our shoes. Soon the inclination gets steeper and the heavy bag packs makes it difficult to take on the heights. However these steeps are no concern to someone who’s a regular trekker.

Soon we come out of the forests, and the plains treats us a visual delight. One can see peaks spread with beautiful flowers upon them that makes it appears like a carpet complimenting to its beauty.

Crossing the stream, the water here was chillingly cold. The couple of guys who managed a bath truly need some applaud.

The Groundnuts that Rajesh had bought were in Great demand.

The king size leach that I found here fully absorbed sucking blood inside my shoes.

The watch tower that stood tall, I shall remember this tower.

.The Narimale Guest house, This place was where we were housed in the night.It still makes me confused on how could anyone build such a fully fledged building at a place this high in altitude. How did they ever manage to get so much bricks, cement,etc.

Later in the day we left to Munikal Caves on the kerala side of the Mountains. The walk we had here is rightfully to be named the” walk on the clouds”. With visibility dipping to as low as less than 4 Mts by the evening, The joy of walking on the mountains without a heavy pack is something that can only be felt, than said.

The dinner in the night was cooked inhouse with mithun adoring the head chef post, soon we were able to relish Chapathi’s with hot Curry freshly cooked with lots of vegetables .Shavige Bath was also part of the menu.

Meanwhile the leaches had done lot of damage to my legs. The blood wouldn’t clot. This left me bleeding all throughout the evening and I had to even shelf the idea of using the sleeping, instead slept on a mat alone. My legs that were actually bleeding profusely had to put inside a carry bag before sleeping along with the carry bag until my knee.

Woke up early at 6, we left the guest house by 7.30 and headed towards the Brahmagiri Peak. We were treated by some beautiful peaks on the way and a couple of elephant encounter, both in single and in groups.

The climb to the top was a daunting task. It took several stops and several sips of water in between. We were greeted by a herd of Sambhars around 30 in number; they were suddenly quizzed to see us in their territory.

Spent around an hour admiring the beauty of the landscape that lay around us. The view was mostly subdued due to mist that lay surrounding us. The group of 7 elephants at the foot of the peak was picked up by the cameras. We then gulped on all the food we had brought along with us.

The group then split into 2 groups while getting down from the peak. A few of us choose to take the path through Kerala and the rest of them got down through the same path that was used to climb.

The 8 of us then decided to try an alternate route back to the forest camp that apparently went into a tizzy and 3 among us got into trouble with the elephants and the Guard had to come back to get us out of trouble.

We then made it back safely to the forest base camp from where it took us one hour roughly to get back to Irupu falls. Thus the Brahmagiri Trek had officially ended. Got into the water and enjoyed the thumping falls, they have a masseur effect on the shoulders. This was a rejuvenating experience

We got back to the Base as soon as it gets and left for Bangalore, stopped by at Gonikoppa for dinner and made it to Home by 3:3A,m

I thanked my stars a 100 times that I found this amazing group of people. They’re so much fun and professional.They do things the way it’s meant to be done(Trekking). Thank you guys. You’ve been totally great. Loved trekking with you people.
Now I proudly call myself a BASCian
Posted by karthik at 6:09 AM

Nicely Written, this should give you a concise idea about this place.