Its all about the Bike_____ continued 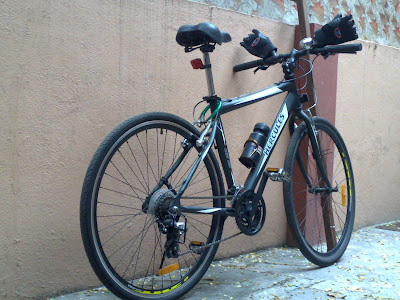 Biking these days assumes a larger meaning and the word isn't just restricted to the the world of Motor Bikes.

The Bi-cycle interestingly takes a startling entry into the Biking World. The manufacturing technology for the Bi-cycle has really made the cycle to be looked upon with a greater zeal.

So what if one asks me ,whats the scene in the indian roads currently?

The Cycle is soon catching up among the eco conscious, health savvy youths and adults especially. Bangalore interestingly has a good chunk of cycling communities who are mostly within the 30's. The current breed of people aren't driving an Hercules MTB or a BSA cycle that we all rode in our childhoods. They're more obsessed with Bikes from Brands like TREK, MARIDA, FIREFOX, Etc. These imported brands come at a great price but also offer a great riding experience

Bangalore as i see isn't that very friendly for a cyclist in terms of the road comfort, traffic, the inclination, the flatness ,etc. The usually over cramped roads are a spoilsport for a cyclist who is already sidelined because of his speed limitations on road. There aren't seperate lanes for cyclists like how a developed city would typically have. Yet the bangalorean isn't ready to find reasons to avoid cycling, instead he's making things better for himself. There is already an active community of substantial number of people who commute long distances to work by cycle. The online communities like the "Bangalore biking club", etc is fostering a lot of interests among people by constantly organizing weekend cycle rides for interested people, also providing back up vehicles and quite some publicity too.
Recently after some protests malls like Mantri and others have provisions for parking cycles too, that is a positive change

So whats my association with cycles!!!

Lets go back the memory lane. Once upon a time there was this kid who was so obsessed with the cycle that he had given up food and water in his relentless struggle to upgrade to an Hercules MTB Bike from an existing smaller bike. and this happened for a day and a half untill his parents gave in.

I should very honestly agree that Bicycle in my childhood truly represented mobility ,freedom & wings. Be it to the daily trip to Primary School with bags affixed on to the Carrier, pay 0.50 Rupee parking charge for parking it in the school grounds.

I can even recall my "EXPLORATION" Expeditions with my dear school pals exhaustively covering the nukes and corners of Bannerghata road, Hosur Road and also the current new add on areas to the JP Nagar. The idea was simple, We used to set sail on all ourselves exploration new localities that were mostly undeveloped then
The busy and the buzzing localities surrounding the Bannerghata nowadays used to be a barren un tarred patch of lands with snakes, etc wherever we went.
Roads then were much safer for cycles, than they're now
The association with the cycle continued until 10th standard and then it died down

Here is my cousin who's flown down from the US once in for all and he buys a cycle for himself. I'm awestruck and curious. I drive his cycle and i feel great about it
Its got this really thin tires, aluminium body that makes it light, 21 Shumano Gears that really takes away all your effort. Am impressed and i instantly buy the same cycle and we start going on trips in the weekends

Places we covered till date

Every time we take our bikes out, we add in 100 kms of travel that came straight out the effort of the muscles. No hydro carbons, no batteries, no emission, Just nothing but pure muscular energy

My stints with the bike!!!


The physical fitness plays a role only for the first 30 kms and after that its purely the mental fitness that just takes over. Initially when we started pedaling there were instances where i felt tired in the first 25 kms , however endurance i believe was the one which could take me places. At the end of the ride we'd have clocked in 100 odd kms easily and still left with ample energy for the rest of the day

When i set out Biking with a Dry fit Nike shirt at 5:00 in the morning, i feel chilled for the first 5kms until the body heats up, The i-pod has to be there by default. then there is the gloves to the hands which are very important and a really hard shoes. The water bottle filled with 1 ltre of water.

Flat roads are a delight, the ups are a slight pain in the ass and bearing the Sun is again a difficult task. The winds are lovely, but could get slightly tricky if they blow in the wrong direction

At the end of the day riding the cycle is pleasurable, refreshing and healthy
Its more about the joy of the bike, and its got very less to do with eco friendly and a slew of reasons that come tagged along
Posted by karthik at 10:21 AM