Ganapa- One god many colors 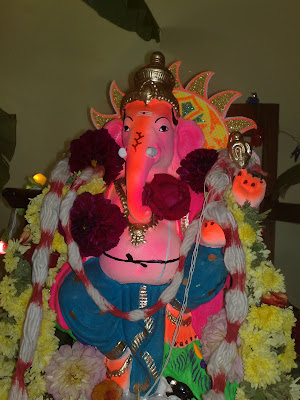 Ganapathi in short Ganapa is by large the most popular Hindu god. Alright, that's something we all know.Now In a country like India with so much of diversity in religion, castes, etc its hard to really arrive at a consensus about the more acceptable form of god that can be acknowledged by all kind of people. If there's one god whom anybody and everybody can identify with devotion , then its got to be the Ganapa. I believe he adds a lot of flavors to our lives everyday.

Its been a month since this year's Ganesha chathurthi and i have been eager to pen down some thoughts that crossed my mind on the festive. Gowri Ganesha Festival has been one of the more important festival to my family. There's a lot of joy, lot more to the way the festival is observed in my house. The Gowri habba has a bigger attendance with all the women power from the family getting one to traditionally do the pooja, while the Ganesha habba is restricted to only the men from our house. The other men from the family are doing it in theirs.

While i dont think i can throw much light on the gowri festival as am not that connected with the pooja, it is the Ganesha festival that interests me. It all starts with the Clay idol that has to be bought into the house. A lot of bargaining happens before fixing a price to the idol. The shopkeeper demands more while we're on the opinion that the god isn't worth all that money and thus we bargain. On a lighter note , the bargaining thing is more a gene product and comes embedded in oneself . Its hard to Suppress such an inherent instinct, so even the god's have to make way only through bargain channel.

The streets of Bangalore adorn in a complete festive flavor filled with hawkers selling various pooja items. Be it the Ganesha Idols , the Banana plantations ( BAALE KANDHU ), fruits , flowers of all colors. Its a delight to be walking past such a place that is overflowing in festive mood.

There's more to the cultural linkages with the city and the Ganesha Festival. The street pandals houses Ganesha of huge sizes backed by an impressive list of various cultural programs that identify with our tastes and tradition. While its true that in other cities the same festival is celebrated in aggrandized manner with even more fanfare, the tradition that bangalore follows has suited the people in here for a long time.

The pooja vidhana for the ganapa is an elaborate one, but they all make so much sense. the naividhya ( offering to the god ) has the tasty Kadbus in them along with many other items. 21 kadbus waiting to be eaten later once they're shown to the god, ha ha. This is followed by an immersion of the idol the same evening or the following day. the turn up at the immersion place is a scene particularly worth mentioning. People line up with different sizes, shapes and colors of Ganapa adorned with flowers and waiting to be immersed in the water once in for all. The devotion is at an all time high, backed by some final pooja before the god is let go into waters. Finally the Ganesha festival is here to an end, only to come back the next year same time same season
Posted by karthik at 7:28 AM