Karnataka…. Just one state, Many Worlds 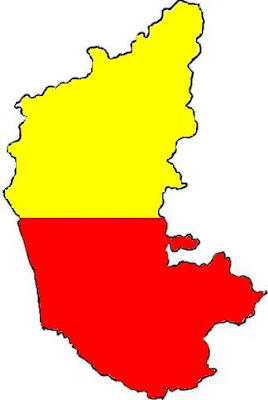 A piece of history:

India became a Republic in the year 1950 and in same year linguistic provinces were formed. The state of Mysore is one such state in the south India. The state of Mysore was created taking into fold various parts of the region, which were ruled by kings. Several districts in, now called North Karnataka and Hyderabad Karnataka were dissolved in the new state. The new state was named after Mysore, which by itself was a princely state. People of North and Hyderabad area did not accept the name Mysore; People of this region were demanding a change in the name. After prolonged debate the name of the state was changed to KARNATAKA on November 1 in the year 1973. Late Devaraj Urs the then Chief Minister of state took this landmark decision. Officially the new state was born on November 1 and on this day every year birthday of the state is celebrated. This is popularly called as "KANNADA RAJYOTHSAVA or KARNATAKA RAJYOTHSAVA" means "State Festival"

The Karnataka state in whole is one of the fastest growing states in India. The Capital city Bangalore has stood true testimony to the technological boom of IT industry and Other IT Enabled Services. Even to this date Karnataka has the highest revenues generated out the Export duty derived from the IT. The city has also been responsible for crafting the success stories of many Young engineers who have gained from enormous talent pool attracted by the IT. Some of the biggest IT majors are based out of Bangalore and the city also houses a few biggest R&D Centers of the MNC's outside US. In the agricultural domain Karnataka tops in the production of Coffee and other spices. Rice, Ragi and Sugarcane have been some of the other most widely grown crops in Karnataka. The mining fields rich in manganese and Iron across the northern belts of Bellary account for huge revenues from ore exports. There has also been much effort to promote investments both in IT and Non-IT across the smaller Tier1 and tier2 cities to improve economic prospects and ensure uniform economic developments across all regions. The recently concluded Global investors meet promises to bring several thousand crores of investments in all sectors primarily the power, steel, food technology apart from the IT investments.

The Malnad regions in the Western Ghats, the vast coastline along the Arabian Sea, the historical architectural marvels in Hampi, Belur, Halebidu Chitradurga, etc make the state an important tourist destination. From the highest waterfall in india, the Jog to the tallest Monolithic statue, The Gomateshwara of the Shravanabelagola can be found in here. The Western Ghats which are the bio-diversity hotspots of the world are home to rich natural resources, flora and fauna. The longest stretch of Western Ghats close to 800kms falls under the state. The tourism department of Karnataka has been aggressively promoting tourism in the states through many programs. The tag line for tourism being "One state many worlds" is an awe inspiring one to hear. The recent Golden Chariot Premium Rail tour takes one across the length and the breadth of the state in the lap of luxury. The Mysore Dussera that is world renowned for the Jumbo savari is attended by people from across the globe. The event that dates back to 400 years is a tradition followed from the times of the Maharajas and has flown down from generations together. Karnataka is also home to a healthy population of Wildlife. Some of the most important Wildlife parks of Karnataka are the Bandipur national Park, Nagarahole, Dandeli and other smaller reserves. Estimates say that there are close 300 Tigers in Karnataka spread across different national parks, also there are close to 5000 elephants. The Malnad regions around Agumbe are particularly known as the Majestic King Cobra habitat.

Culturally Karnataka has a lot of diversity within the state. Although Kannada is the official language of the state, there are several minor languages like Tulu, Konkani, kodava, etc. The other regional languages of the country like Tamil, Marathi, Telugu, etc are also widely spoken as a confluence of movement of people across the borders. The kannada language has been recently granted the Classical language status taking into account its rich heritage, the fact that the language dates back to 1000's of years. The Contribution of Various literary personalities to the development of the language has also been a key reason to the recognition of the language and its popularity. Kannada has received the highest number of Gnanapita award that is 7 in all. This is highest for any language in India. The credit to which may be attributed to some of the prominent poets and authors of Karnataka. The state is also home to some of the famous piligrimage centres that are thronged by millions of devotees every year. Some of the prominent religious places would be Kukke subramanya, Dharmasthala, The more Serene Sringeri in chikamagalur, Gokarna, Kollur, Chamundi hills, Melukote, and many more destinations.

The kannada Rajyothsava award instituted by the Govt. of Karnataka recognizes prominent personalities from all fields and awards them. The award stands for a lot of glory and pride and is received by individuals with a lot of respect for the same. The political scenario in Karnataka is something worth mentioning. In the last decade the state has not been lucky enough to see stable governments rule the state for the full term. There has been instability with all the governments and the president rule being imposed quite often. This has definitely taken some toll on the image of Karnataka and as far as the development activities are concerned. This has also resulted in creating a dent on investments.

The state is criss-crossed by some major national highways. The roads bring in development; however the state still lags when compared to other states in India that have a wide network of roads. The Rail road network has also particularly taken a back seat when compared to other states that have greater densities of Rail network. Not all districts in the state are linked through rail network. Also Electrifications of some of the busiest rail routes are yet to be taken up. The only international airports in Karnataka are in Bangalore and Mangalore. The airport in Bangalore has been recently shifted to a new location at a bigger terminal that can handle increased passenger traffic. The Table top Airport at Mangalore also has international operations, Touted as one of the most difficult airports, there has been an accident here involving death of 160 people aboard air india express flight very recently.

The history of the state suggests that it was ruled by the Hoysala Emperors predominantly in the past. The emblem of the state that is symbolized by the 2 lions is called as " Gandaberunda" .The same could be found at the entrance of Vidhana Soudha. This emblem is derived from the hoysala dynasty. Vidhana soudha is where the seat of power resides in Karnataka. This is one of the most beautiful Administrative houses in india and was envisaged and built by Late Sri Kengal Hanumantiah. The other important institutions in the state that are of national significance are Research institutes like IISc, IIMB, ISRO-ISTRAAC, DRDO, LRDE, NAL, IIAP, also many big Public Sector units like BHEL,BEL, BEML, HAL, NGEF in the past, ITI, etc.

The movie industry of Karnataka is fondly referred to as Sandalwood. The movie industry dolls out a 100 odd films every year. Some of the actors of the yesteryears who are a house hold name would be Dr. Raj Kumar, Dr. Vishnu Vardhan, Ambarish, Srinath, Shankarnag, Ananthnag, Ravichandran etc to name a few. Although the movie industry isn't as big as it is elsewhere in the country. The kannada movie industry does still manage to have its share of Local audience who cherish and encourage the kannada movies. The theatre that had for long been sidelined with the advent of Cinema and TV's is on the revival path with many Theatre houses like Rangashankara, etc promoting theatre among the masses which for a long time had been restricted to the certain niche class of people with interest.

That's Karnataka for now, Happy Rajyothsava for everybody.