The Saddle, The Pedal and The Wheel- The Cycling trip to Mysore 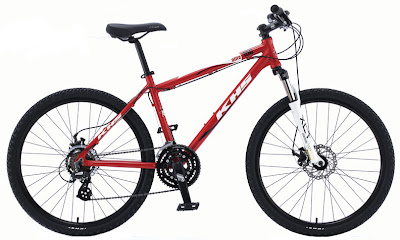 It had been over a month since my new bike (AKA Cycle) KHS Alite 150 was bought. This beauty in the red imported straightly from the US and had been a pleasure on the road. The extra wide handle bars, the light frame, the smooth Gear Shifts and the wide tires were just a perfect combination to take on Bangalore roads. I had been doing short city trips. The Handling conditions and ride this beauty offered was a delight. Cutting across major traffic bottlenecks, jumping signals, occasionally getting over the foot paths gave a rush of momentum and a knock of adrenaline that a 2 wheeler/4 wheeler failed to induce in a rider driving inside the city. However the bike was yet to be tested on a long drive.
My mind had been hatching a bike trip to Mysore for some time now, which had apparently run into trouble for obvious reasons of fear of fitness, endurance and the confidence obviously to pedal that long distance. The new bike had brought in more seriousness about biking and the comfort it offered to the driver along with the smooth gear shift instilled much needed confidence to embark on SH-17, on the journey to Mysore.


So here we were on the early morning of 30th July 2011, the day when we set sail to mysore with our bikes. Rajesh arrived at Raja Rajeshwari Arch, the starting point for our trip late by 30 mins which meant we flagged off by around 6.15 AM. The 4 lane road with wide dividers is by far one of the best state highways existing in Karnataka. There was no complaining on the road, yet the speeding cars and buses meant that we need to position and drive our cycles towards the absolute left side of the road. It also meant that it was very important that we held our handle bars firm, unless didn’t wanna be knocked down by an overtaking bus or car trying to be casual.

Lap1:
Arc- Bidadi
The early morning ride, cool weather, relatively less traffic, no sun, no winds, lot of energy which meant we kept a good speed of 25-30kmphr. The ups and downs went unnoticed with body pumping a good rate of energy on the pedals. The saddle appeared like a comfortable seat.
We stopped by Bidadi for Tatte Idli which every other hotel in this area flaunts about being an expert in preparing. The tasty idli with crisp Vada easily made their way in. After a delicious filling breakfast, we hit back on the road not wanting to waste anymore time.

Lap2:
Bidadi-Maddur
The golden hour for cycling had come to an end, the sun was slowly getting up the horizon, Sunglasses had to be pulled out from the bag, Music makes for a good company (The right Music!!), slowly the ups and downs could be felt from now on as we near the 80kms mark, yet there was no feeling of exhaustion, we kept the pedal on rotation and soon hit Maddur by 10 AM.
A bottle of Maaza at the second pit stop. 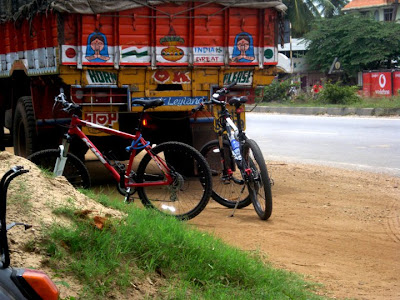 Lap 3:
Maddur- Nandini ice cream Parlour(5kms from Mandya)The joy of cycling had been sounding all alien in this stretch which was marked by incessant ups and almost no down stretches, the energy fuel tank was almost hitting on the brink of extinction leading to exhaustion. I received a couple of phone calls which led to missing out on trailing behind Rajesh. By the way meet Rajesh, my close trekking pal and the Himalayan cyclist, also a marathon runner. The guy is never short of energy, his endurance and stamina just keeps him going.

I did reach Mandya soon although lost out on catching up behind Rajesh by 10-15 mins. Passing by the curious onlookers, some motor bikers,etc I enjoyed this weird attention and the look that they would give. Bought a dozen full of sweet tasty Jack fruits on the way and proceeded to the ice cream parlor where Rajesh had been waiting. 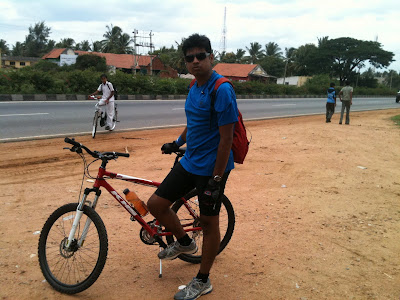 We did leave this oasis ice cream parlor in 20 mins. This time I was pretty determined to battle it out, The body which was the silent rebellion to break inertia had no chance to act, the mind all set to break in, took control of the resilient body and thus I took the lead. The saga of the Up stretches continued to daunt us but this time I wasn’t the one to give up. Took a lead ahead of Rajesh amidst unsupportive winds and soon crossed Srirangapattna to take the final pit stop which was basically a ‘pee’ break.
Hit back on the Road soon in 10 mins to take on the final stretch of 12kms

The joy had already mustered into the minds, the traffic was getting thicker and thicker which meant that we were approaching the city, Cheers of joy had silently made its way into my mind, indeed I had finished cycling to Mysore. The city, the historical capital of Mysore State, to which I had been endless number of times in life by various means of transports like bikes, trains, buses, cars, etc. This very moment had been the moment of realization that I had cycled all the way to Mysore, covering a staggering 155kms from my home. A distance that used to take 3 hours in Train, 2.30 hours in Bus, 1.45 mins by car (My personal best Record) now took just over 6.30 hours by the cycle. This beautiful man made vehicle that came without a drive/motor, the vehicle that had been an epitome of my childhood was now also a part of my adulthood.
Every curve that figures on the SH-17 will now firmly register in memory, the sweet reminiscence of which shall reoccur within me every time I hit this road on any vehicle. The joy of carrying yourself in motion all by yourself for such a distance is a definite feeling of accomplishment to cherish for days to come.
The charming lady in the red, my KHS-Alite 150 was a perfect companion on road. She supports you fully be it on any difficult stretch, no matter what the angle of climb, and on a flat road I shouldn’t point a thing in cruising at anything less than 30kmphr.

We headed to Ambareesh’s house at Saraswathipuram, had a very tasty filling lunch, and spent the rest of the Afternoon lazy and down watching political drama on the television and seeing Dravid score that 100 in first innings of the second test.
Later on that evening cancelled plans to Cycle to Nanjangud owing to Rains and a dangerous Road. Instead went to DJ Urs Road to catch glimpse of many a things that I can’t really talk about.
Settled down for the day at Rajesh’s friend’s house enjoying the warm hospitality that this person offered. Caught with a sound Sleep, here sound meant Sound literally.

Woke up by 6 Got ready by 8 after finishing the breakfast headed to Nanjangud on Motobike. I was overwhelmed seeing Kabini River flowing in full splendor at this place.We were able to make it back to mysore by 10 AM and headed on to Railway Station.

We booked 2 of our cycles as parcels soon and left the city by Mys- Ypr Express that left Mysore by 12:10 and reached Bangalore by 3:00
Took some formalities to release the cycle at the station in Bangalore, yet we comfortably made it back home by 4.