My Grandparents had been insisting that they be taken to Manthralaya for quite sometime now. This trip having been on cards from May had been postponed, cancelled for various reasons. The non-Availability of train tickets to this place had been a major detering factor and it would be difficult for them to travel on a bus or otherwise.

I was lucky to have found a Tatkal ticket this Sunday the 10th on Udyaan Express for 12th and plans were already rolling for what could turn out into a great trip edging more towards the divinity angle. A Return ticket was booked on Ahmedabad Express for the evening of 13th. 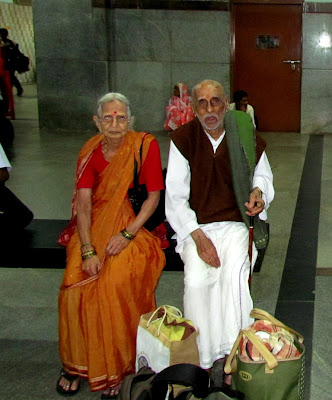 
Left the office early on 12th and reached home. Soon we made it to the station in car and boarded the Udyaan Express. The very unfateful train that would reach Mumbai on the 13th, The very unfateful day when 3 explosions rocked the city after 26/11. Luckily we needed to get down the train at "Manthralayam Road" Station and let the train go further. 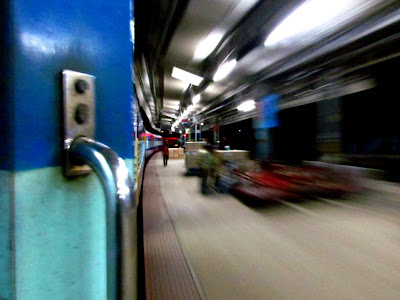 Manthralayam:
The sleepy town by the banks of Thungabhadra River in the District of Kurnool, vastly Underdeveloped, trying to recover from the deluge that the floods brought in last year. 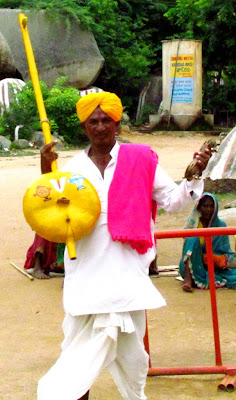 We made it to the room by 6:30 AM, after hiring an auto from the station to the temple. Quickly got ready to enter inside the temple for an ecclesiastic time with Lord Raghavendra Swamiji's Sannidhi.

The temple surely brings in that sense of devotion to even the more lighter souls like me who are cut loose. The brindavan which is the epi centre of the attraction houses the live samadhi of Sri Sri Raghavendra Swamiji who lived and traversed during the 16th Century. We finish all the Darshan and the poojas by around 9:30 and are left with doing nothing untill lunch. I just cashed in this oppertunity and put several Rounds(Pradhakshine) around the Temple(Sanctom Sanctorum).

It was soon 12PM and lunch time was here. This pious meal served for the dedicated lot was marked by Rice delicacies of various kinds. I had a strong feeling that i ended up eating half a kg of rice for the meal.

Post lunch we headed on Panchamukhi temple dedicated to Lord Hanuman on the other banks of Thungabhadra River. This bank belongs to Raichur district of Karnataka , while Manthralayam was with AP. Since there is no water transport to cross the river, we took an auto which needed to take a long detour and finally reach panchamukhi, covering close to 20 kms for a distance that had been under 4kms crossing the river. The dilipated state of the road, the miseries that the recent floods had brought to this area is definitely an eye opener for the urban lot who are stuck realising their material dreams, succeeding through competition, Win by pull/Push.

These areas lack even the basic sanitation facilities. The water from the houses are directly let into the pits dug up in front of the house. This stagnating impure water wastes is a live breeding ground for insects, an open invitation for anybody wanting to pick up diseases. The crumbling infrastructure like the roads, transportation needs a complete facelift.

Yet, people have a sustained economic system that is more or less near the poverty line, there is absolutely no dearth for the curiosity on their face, a occasional smile. Even though i could see huts and similar such houses all along the way, these huts were colorful,some of them even had a DTH antenna at their Top :-) 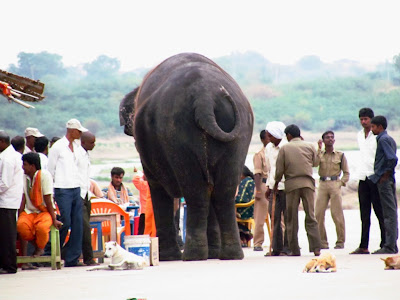 We made it soon to Panchamukhi, a place where Sri Raghavendra Swamiji once meditated below the rocks for 12 long years, and it was at this place where gods appeared before him and entrusted him with the mission of carrying himself to Manthralayam where he would permanently rest in peace. One could see some of the natural Rock formations where a huge rock rests miraculously on small chunk of rock and it stands firm for ages now. 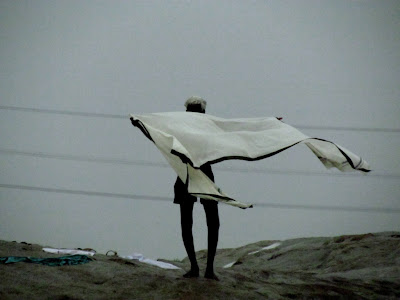 While on the way back we needed to pass through the thungabadra river Bridge that forms the road link between AP and Karnataka. This bridge had been washed away completely with the floods last year. one could see chunks of portions of bridge fallen into the river and rubbles of road leading to the bridge. While the new bridge is in the phase of construction , a temparory bridge has been laid for the light vehicular movement

We made it back soon to Manthralayam, the same bumpy ride, the Auto that seems to miss out on Shock absorbers. We packed bags and left for the Railway station. The ahmedabad Express arrived on the platform late by 20 mins, yet elegantly made it to Bangalore just in time the next day morning.

The short trip had thus finally ended, My grandparents had been happy about seeing the god and luckily they finished the trip without Much strain
Posted by karthik at 8:02 AM