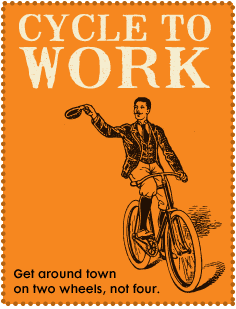 In a bid to cut down on some additional flab and reduce weight I have taken to look back on to “Cycle to Work” Concept. So this entails me to be cycling for 40kms in total every single day. Although, the project took off with many apprehensions, it has been flowing smoothly with a few minor glitches.


So a week later, my body seems to slowly adapt to the strenuous workout schedule that the cycling brings with it. The activity is quite an enjoyable one though. After a refreshing bath in the morning, it’s a great idea to feel some fresh air, flex some muscles for an hour of cycling in a relatively emptier, free of Signal road. On the Contrary, the drive back home after a day’s long work is another experience in itself. Navigating your way through the slightest gap in an already overcrowded road is an accomplishment no less in difficulty. It brings in much needed excitement and delivers a punch to your wits after a routine day at office. An eye for the slightest detail, an ear for the most feeble sound, a Body with Proximity sensor all around, etc these are some of the factors that makes a difference between a safe ride home OR ending up with a road accident :-(
Here are a list of Pros and Cons of cycling on Bangalore Roads that people should be watchful. The critic in me is more tempted to complain, then appreciate, so let me start off with the cons of Cycling in Bangalore.


1. “THE ROADS ARE FILLED WITH IDIOTS WHO HAVE NO RESPECT FOR CYCLISTS”

The economic boom in the recent years in Bangalore has left many an idiots with absolutely no road sense or respect for fellow travelers to own up a two wheeler. It’s quite an easy affair for these idiots to procure 2 wheelers/4 wheelers through an easy EMI Scheme, Exchange offer or buy a pre owned vehicle. Their Haphazard Driving habits, casually switching lanes, dangerous overtakes is an eminent risk a cyclist faces. If autos took all the blame game for so many years, now they have a fierce competitors, The TATA INDICAB cars, who’re even more absolutely careless and reckless in their driving habits, of course exception do exist in the above list

The crippling transport infrastructure also ensures that cyclists have a tough time navigating those huge path holes or crevices :-) and unscientific humps that form an integral part of Bangalore Roads. The light weight construction of the cycle leaves these cycles with poor ability to take on the Bangalore roads. Although the ride on a flat road is absolutely enjoyable, the treatment meted out to the Bums resting on the small Saddle when passing through uneven road is a sad tale to share here :-(

I was wondering the other day, ‘who else than a cyclist know better the value of g’. The uneven altitude of Bangalore leaves it with practically innumerable number of ups and downs throughout the city. Although driving through an up is one of the best work outs one could possible get, it becomes an unsought after affair in a long distance ride and especially a total ` Ban for office commuters. As the sweat it induces stays with the cyclist throughout the day, this could in turn lead to hygiene issues at the office places. Having a colleague of yours in office with a stink and body odor walk around you the whole day is not particularly the greatest thing to have in office.
By the way 'g' meant GRAVITY
I intend to wind up with these reasons, the list of Cons the cyclist faces. Now is the time to make your hearts light. Let me bring out some exhilarating, light or Funny moments that a cyclist could end up in cycling in Bangalore.


If a good rider on a 2wheeler rode his vehicle at 50kmphr on a Bangalore Road, the cyclist practically ends up driving at an average of 25kmphr, except at some places that either have too flat and broad roads or have no traffic snarls where he moves much faster.
Moving at exactly half the speed of the 2 wheeler, you get put your eye on every detail, and every detail gets to put an eye on you :-) :-). Now jokes apart, moving at this pace, you certainly the watch the world around changing at a slower pace. One gets to keep a thorough attention on various landmarks, buildings, Commercial establishments, Entertainment zones, etc, all these places which may have otherwise got missed out from the person’s attention. So yeah, it makes you more geographically knowledgeable about the city.


2.  “CYCLING IS ALL ABOUT CYCLING, THE JOY ASSOCIATED WITH IT”

A real Cycle enthusiasts who rode a cycle in his childhood extensively would definitely remember the innate joy associated with it. In a motorized automobile world like ours, where everything runs on a motor that is solely driven by a liquid fuel and ultimately emitting noxious emissions, to be driving a bike alone through your muscular energy, to be covering huge distances, to be supplying all those energy that came from Fossil fuels all your self is a feeling best appreciated when experienced than heard or said.
Its like a guy cooking his own meal,
Its like a person building his own house.
You go independent, all yourself, a Flawless standalone entity worth taking note of.

3.  “BURN AND SWEAT THOSE ADDITIONAL CALORIES”

A very conventional reason that I don’t have to talk about much, I shall move on

Guys, the reason is strictly ust to be read and not to be followed. I just thought of enlisting this reason in academic interest to make the article Complete. Yes, indeed, if you’re too annoyed with the pace traffic moves in Bangalore, You may occasionally take on the Footpath, ride on the one way Road or Jump a Signal. Although these actions may have other repercussions by the way of safety of the cyclist, etc. The option does still exist :-)

5.“STOP BREAKING YOUR HEAD OVER THE FUEL HIKE”

Fuels hikes don’t hurt you no more. For all those people who ride alone in a huge car to office with glasses pulled up and AC in full throttle. Guys, give yourself a life. You may be laughing out loud on others just because you have a diesel Car and are benefited on par with your petrol Counterparts. But don’t ever forget that Diesel as a fuel is subsidized to help the Farmers of this nation Sustain Fuel Costs on all their Farm equipments like Tractors, etc which run on this Fuel. It is being subsidized to help the Commercial transport Sustainable to help the economy see more development. You may be slowly eating away from somebody else’s pie today, but tomorrow the same is going to hit back on you. ACT now, before it’s too LATE.
Before I get more and more thoughts emitting out, I would best prefer to sign off for now. I will definitely come back in a month’s time to share my experience on the one month continuous Cycling Schedule that is currently rolling. I shall wait, cycle and then Watch

quite enjoyable, loving the article and nice presentation..