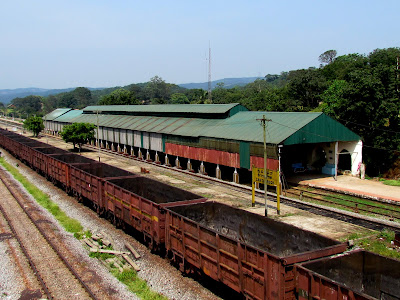 My quest for travel takes me to a considerable number of places. As the list of these places increase in number, the desire to cover even more number of places is inevitable.  But at times the temptation to revisit some of the already seen places takes over this quest to see more places. These are times I am just tempted to visit Dudh Sagar, Pondicherry, etc.
It all begin in the year 2009 when I first visited DudhSagar, Like they say “Attraction to you comes naturally to me”. Falling in love with this place happened naturally. Ever since then I have been regularly visiting this place year after year. Each year I come with a bouquet full of expectations and return with a bountiful of fond memories. 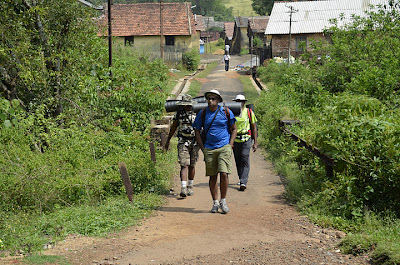 This secluded place, which is known to a few lies in the south northern tip of Karnataka. It all starts when the “Chennai-Vasco Express” leaves Hubli at about 6AM. The natural green carpet of nature unfurls along both sides of the track, complimented by a humming sound of the engine that soothes your mind. As you say good bye to the humanised and mechanized form of world, a more beautiful and rich world laden with all its green jewels occupies your sight.

We alight at Castle rock on a beautiful Saturday morning. The sun is about to show his might after rising up the horizon. Unlike the conventional route through the railway track, this trek had been planned through the jungle.  We quickly cross the railway over bridge across the station and reach the small village neighboring the station. The village houses a population with a cross cultural influence of both kannada and Marathi Languages. The population is around a 200 or even lesser,   with people mostly dependent on employment in the big railway station nearby.
The itinerary of the trip was to reach the Summit of DudhSagar taking a Jungle, through a small Hamlet called Kuveshi. There are exactly 2 different routes from the Starting point of the trek to reach Kuveshi. One of the route is a motorable(Bike or Jeep!, Although not sure about the feasibility of Jeep) and the other route is to trek along the Jungle.
As soul trekkers with all the gears on, we embark on the jungle terrain, criss crossing Pristine Streams, green & dried grassland, amazing landscapes, Big wide Shady trees to rest under and climb over J. We also come across some creepy insects with amazing colors. 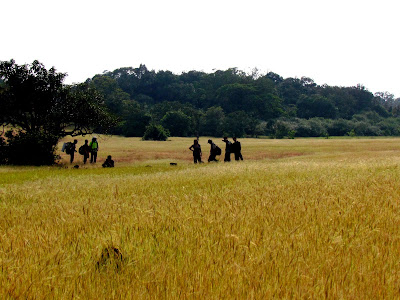 The route is well laid out and is supported by direction indicating pole stands at turns or curves. After a casual walk for half a day, we break for lunch. Soon after we resume another casual walk which was of a slightly tougher level and make it to Kuveshi by close of the day.
Kuveshi:
This place is a total masterpiece. A small tiny settlement of about 10 families, who are into farming.
If Castle rock had an influence of Kannada and Marathi Cultures, this place was more influenced by Goan cultures along with a pinch of Kannada. The greatest part is yet to come,The place has no electricity or water facilities. All they have is pure and unpolluted air and the Mandovi River(their only water source), which flows through the village ultimately forming Dudh Sagar and heading towards Goa. This place belongs to Sirsi District of Karnataka. 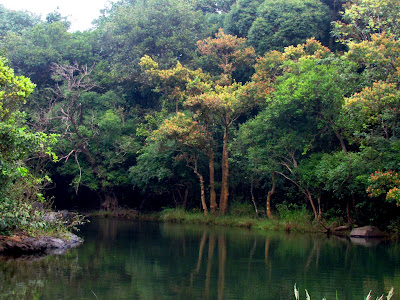 We manage to Pitch our bags in the Govt. Primary School at Kuveshi, and break for a refreshing bath at  the nearby Mandovi River. The water although chillingly cold took away all the body pains that a day long trek had brought in. The fish Massage in the river was one particularly mentioning. The tiny little needle poking your legs in all direction is a good tickle one could get. The dinner for the night was prepared by a resident of this place, who offered us a filling and tasty meal

The Govt. Primary School served as the Lodging for a few while the rest of us found solace under the starts inside our warm Sleeping Bags. The charm of the sleeping bag was also irresistible that a neighbor kitten took turns in cuddling up itself under this sleeping bag all through the nightJ.
Day 2:
Early next morning we start the day off with Cuppa Noodles and other ready to eat delicacies. We soon bid a warm goodbye to the residents of this lovely village and embark on the trail to the top of dudhSagar with the help of a kid from the same village. The trail is well laid and takes a winding route; we see a pack of Languor Monkeys that immediately shy away on noticing our presence.
We again come across Mandovi River, which now has taken a wider trail. Crossing a Man made bridge, made out of Bamboo offered some adrenaline and pepped up the tempo among the group. This had been the only challenging task throughout the trek for the last 2 days.
A 10 min walk from this bridge leads to the fall. The majestic dudh sagar could be heard roaring from a distance. We take several rocky paths, jumps and slippery stones to finally make it to the tip of the falls. A view from here is definitely not for the faint hearted. The railway track on the base of the waterfall appears totally diminished, as if a pair of metal frames arranged parallel to each other.  The train passing down under appeared nothing more than a tiny little toy train with as many bogies as one could imagine. As the train descends the ghat, the entire course of track is made visible by the virtue of the height that we were standing on. 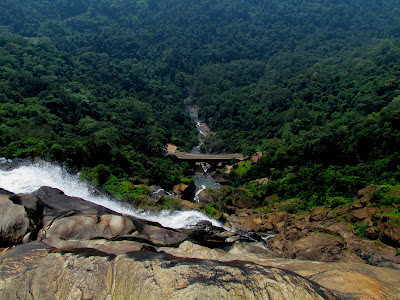 The up roaring sound of the water makes you lose a heartbeat. Your smallest step, a turn, or a jump would mean a wide difference between life and instant death. This raging water takes a plunge from a huge height; it plummets on the rocks at about 100-150 meters below, before finally taking more plunges that are varying in height. This had been the most intense part of the trek. A risky affair that we had taken with a group that was a confluence of both amateurs and experienced trekkers
The way down was a simple affair through the jungle, getting down through an existing path. It took us close to 25 mins to reach the Dudh Sagar Railway Station just above the abandoned Portuguese Guest house.  From here, we reach the actual Dudh Sagar view point and head to the base of the waterfall. An hour trek from here leads us to Saloleim Station from where we catch the Delhi Bound , Goa Express to reach Londa. The bribe to the ticket collector on the this journey was Rs. 200 per head, For travelling in reserved compartment. But with such huge bagpacks the possibility of getting into an unreserved compartment was itself ruled out.
From Londa, we catch the Bangalore bound Kettur Rani Chenamma Express and comfortably make It home on time. Yet another beautiful journey covering some splendid places bordering Karnataka and Goa had now come to an end. The photos and the memories of Kuveshi, their simplistic lifestyle and the beauty of this place will remain in my memory for years to come. The Majestic dudh Sagar although not in its full splendor, owing to the season will still however continues to excite me in the list of Places I revisit every year .
Posted by karthik at 5:20 AM

Amazing Karthik - very clearly laid down writeup!! we are planning to go this place soon, any tips / guides contact nos you have with you which we could use...

Hope to join you in few of the trips in future..

Hi Karthik, I am planning to go to goa next month, i want to visit This Amazing Waterfall. after doing a bit of research on the way to trek this place i came across this route which u have mentioned. Please if you can guide me on this . I have my bookings of stay near Anjuna Beach, i had planned to leave early in the morning and come back by night. is it possible by this route? is there any way that will take me to Kuveshi?
how much time does it takes to trekk up from Kuveshi to dudhsagar.
is there any place to park our vehicles in or around Kuveshi.

Please Reply to this Queries if possible, it would be of a great help.

Thanking you in advance