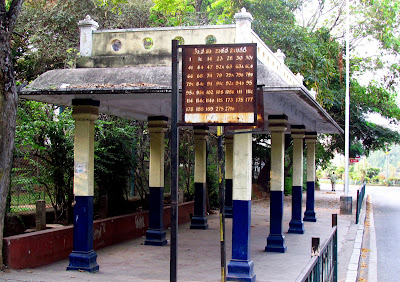 You’re mostly defensive at times, trying to be as silent as possible, unnoticed, undisturbed, trying to put up a defensive outlook towards your surroundings.
But the best of the moments does occur when your least expecting it. This is one such instance I felt worth penning down.

It just happened on a weekday, the routine stuff. Winded up work by 6:30 and started the journey back home. The journey that is described better an epic one. The traffic snarls in the city make it quite a journey that lasts for 1.5-2 hours on an average for a distance of 20kms.

The Bus driver who had been changed this day was a new face on the route. I royally claimed the front seat, reasoning attributed to superior leg space. Being in the first seat, I was automatically elevated to a role of “Nagivator” for this new driver.

The guy appeared to me like a rough one. Unshaved beard, Paan or Ghutka or whatever he chewed, he spat on the road through the window. Abused a random Commuter who climbed the bus assuming it to be a BMTC Bus on the normal route. I didn expect to be talking to this Character for the rest of the journey at all although it happened eventually.

As I got on with instructing routes to this driver, I just asked which his usual route was, just to have an idea which part of Bangalore does this driver usually drive in?
He said “189”.

Phat!!!, I clearly knew this route. The bus that ply’s from JP Nagar 3rd Phase to Mahalakshmi Layout. Having stayed at JP nagar for 16 years of my life, it was easy for me to recognize the route. The driver appeared much excited about his experience on the same route for 16 years.

As we got on talking about 189, we started exchanging our thoughts about the bus routes of the yesteryears, the traffic situations then. This person for whom i felt alienation initially had actually instigated me to think back 10 years and how I had travelled in ease at BMTC buses then. Both of us seem to have so much facts and data that any memories about the bus routes that i put across to him was readily acknowledged and agreed upon.

For someone like me who’s been Bangalore for all his life, the city seems to entice with time, the face of the city adorns different looks (mostly Deteriorating at times! :-(
So as i wondered back through the years I seem to recollect a lot of things that have changed, or changed the way they function.

We coherently discussed so many changes, for instance the guy complained that 10 year back the travel time from Mahalakshmi lyt to JP Nagar was a mere 1 hour , while it now takes 3 hours L. I did recollect that the first Signal that had to be encountered after the bus left JP Nagar was the one in 3rd Block while now the bus may have to already surpass 5-6 Signals before passing through 3rd Block.

It was funny to recollect some of the memories that were fond to me, like travelling with ½ Ticket all alone. The Conductor used to give a weird stare every time i pressed for a ½ ticket be given. Travelling from Jayanagar to JP nagar was mostly free as my Student pass was also issued along the same route.

The driver seem to express much despair that once upon a time he was comfortably able to live up to the stipulated travel time all along the day, and people used to wait for his bus with firm hopes that the bus shall arrive and leave at the designated time, he sadly vents his ire that such a situation is no longer prevalent and people have given in to using daily and monthly passes to be able to hop from one bus to another to reach any destination.

It seem to suddenly get a feeling that had i already lived a mammoth years that i  see such drastic changes in the way city and the transport system in the city runs, the driver was the carrier who got me thinking about such  thought.

Before i got thinking into more things, my stop arrived. I bid a warm good bye to the the friendly driver Mr. Hanumantha and got down.
Posted by karthik at 4:03 AM