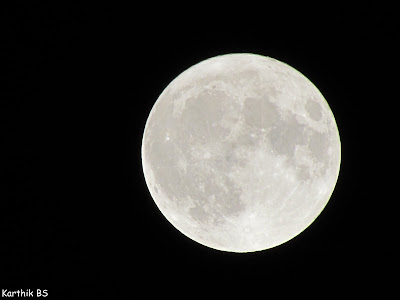 The new year did certainly start of with a bang with a trek from Ankola to Gokarna,
through the untouched, Unharmed Virgin beaches along the Konkan coast. Wading our way through the sand, the Rocks, The terrains, Dry land, The fisherman colonies,etc was certainly a great pump up to start the year with .

Yet the Summer had already made an impression on my mind, The dwindling Leaves from my account and the trees, the never ending deadlines, The year end targets, the owes of Production at the office would never let me out on anymore treks. In the meanwhile my new camera had made its way from a far country and it was all ready to be tested. The long awaited marriages of my cousins in the family was also a big event that needed sufficient preparation.

Yet there was always time to catch up with some miniature trips and treks in and around Bangalore . The bird Photography event to Shivanahalli was one such that is worth mentioning. I feel stunned at times just wondering if such a serene place that close to bangalore can ever exist. The bike ride to The pyramid valley and Vadderahalli lake both on kanakpura road also gave in much needed relief by the weekends.

March had finally arrived. The world has been very unfortunate to bear the devastations happening at Japan. My heart pains to see the country, once victim of the Nuclear warfare is again battling out Nuclear warfare of another Kind this time with their own establishments turning back against them. The Worlds 3rd largest nuclear power generating nation has been Battling out to dowse the temperatures of their Nuclear reactors which have been impending a major Carnage. Adding more fuel to the flame was the speculations about the March 19th being the " Super Moon day".

I had been planning to take the night out on 19th for a moonlight trek, The last moonlight trek to Skandagiri had turned out to be a good one, except the fact that i spent the whole of the sunday sleeping once back from the trek. Lakshmish Chipped in with an idea to go out on 19th for the moonlight photography and it sounded like a great idea. My trek buddies, the trusted entries were soon informed and we had a plan on cards in minutes.

We left the home on 5:30 in the evening on saturday, Me and lakshmish started off and headed to Lalbagh to take a few snips of the moon rising up the horizon. The fading day light, the trees provided a perfect backdrop to get started in click the moon. To remember the moon, for one it looked really big, the pale yellow color was more so because it was still daylight. We did managed to click a few pics and quickly catch up on all the action that had been happening on the venue, (Lalbagh has for long been a lovers hot spot) 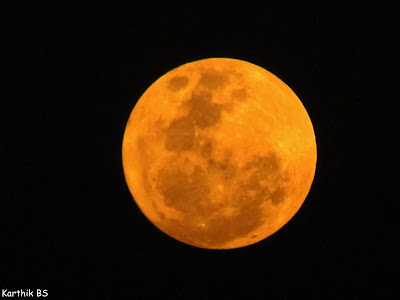 Left Lalbagh by 7:20 PM and headed to Allianz francise where Jay was supposed to catch up. The place often hoists good Musical events and film festivals showcasing artists and movies from the world over. Tonight it was people from the reunion island performing their share of music. The Show catch up well with us eventually, The people in the groups put in a lot of efforts to showcase their music, tunes, instruments which was well recieved. 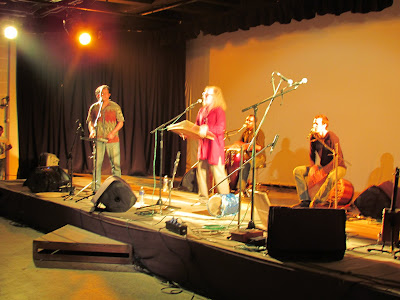 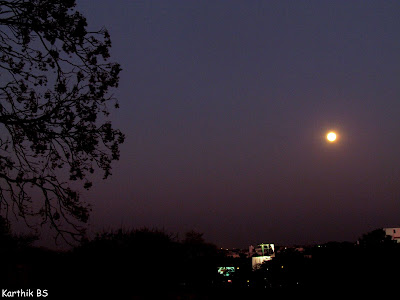 The auditorium eventually made way for some dance by the audiences. We were well of
clicking snaps and relishing their music. The show ended at 9:30. We left the venue and were supposed to pick up Rajesh on the way at Mathikere. He had been cycling close to 24 hours now being back from Nandhi hills. After a quick break for a fruit juice , we headed of to Dinner. After the dinner at New BEL road with Rotis and Biryani's(VEG!!!!). The team headed to Hesaraghatta for some more photography

Stopped by for fuelling up near CMTI and headed towards the Hesarghatta Juntion. The well laid and maintained empty roads are anybodys delight. Lakshmish seems to pep up the throttle and was in no mood to drive below 80.

Soon we were at Hesaraghatta, the small village in a festive mood today as it had been the Jatre(Village festival, worshipping the main deity of the village). from the Dolu kunitha to the Dolls, to the Raja, Rani Horses, every other attraction having made it to the festival. Shot a few pics and headed for the lake.

Touted as one of the biggest lakes in and around bangalore, The hesaraghatta lake is so big that any person passing by is bound to take due notice of this enormous waterbody. Yet we having been there at the peak of the dry season gave us a glimpse of an entirely different lake. The area looked like a huge play ground with patches of water forming islands. Yet the walk along the tank bund was a good one. The moonlight pathand the breeze made way for a light conversation and some humorous moments among the 4 of us. Some of the true fans of OPUS had been going aloud on the pub. Trying to recollect some of the memoirs of the musical events, we just the tempo on.

Soon got into the tank bed which is a good 20 feet below the tank bund and started taking clicking pics. The breeze that came along now was fatalistic, The chilling breeze almost made us feel cold almost immediately. Couldn't hold on here for long, did manage to take a group pic and leave almost immediately 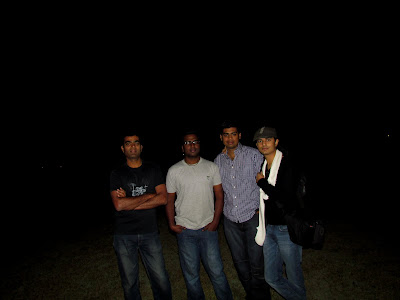 Hit back on the roads at 1:30 AM. The Drop facility extended to all the participants ensured they got back home safely, i managed to get home by 3:00 AM. Special thanks to Lakshmish for bringing his car and driving it all alone :) all throughout.

1. Bird photography the next morning
2. The visit to the Indo-Danish Cattle farm near the lake
3. The Visit to the Rabbit farm and the Turkey farm


The night had been well spent, the company kept me engaged, the moon although not on the limelight of the trip had still made it hugely into the lens of my Camera.

The trip was more of a quick getaway trying to catch up doing some of the odd things
Posted by karthik at 3:53 AM