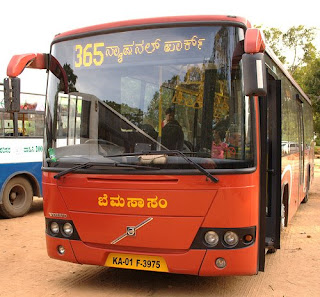 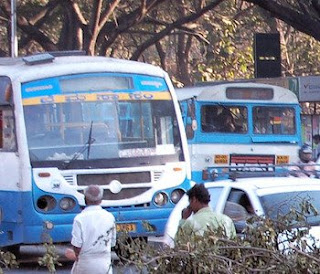 well this time I thought i shall share a little about my personal experience and my views that i've had from the last one month traveling in BMTC buses that rule Bangalore roads or probably i should say ruthlessly rule Bangalore roads. my association with these buses are not something that would just date back to a month or so.I have been traveling on BMTC buses ever since my primary schooling days however there is a lot of discontinuity as i've switched to cycles and then bikes, pooling, etc etc in between. i want to recall here that there was a route 10A which i did travel in my primary schooling days this route was where Rajnikanth used to be a conductor way long back

Now lets throw some light onto the facts and figures that govern BMTC .the organization has close 5300 buses under its fleet including some cozy and modern Volvo B7RLE's with a very low floor, then usual EURO-3 buses called the parisara vahini with the base fares, the new fleet of buses with air suspension, fans and a whole lot of other services like the BIG-10, kendra sarige ,ATAL sarige, etc. it operates over 5000 daily routes the total workforce stretches over 20,000. the total number of depots is over 32 and mini bus shelters all around the city goes upto 2200 and its growing at a huge pace. daily on an average 37 lakh people travel by BMTC. i would say its one of the very few organizations under the government that positions itself as being very dynamic and constantly bringing out new features into its basket. it is also been the most profitable urban transportation organizations in the country making some good figures. the last years profit alone touched over 140 crore . this is easily a huge figure considering the fact that transport organizations all over the world end up making losses.

a lot can be attributed to success of BMTC, be it the absence of a suburban trains or a metro in Bangalore and BMTC being there at the right time to cash in on the opportunity and positioning itself at the right areas with the right fleet of buses and infrastructure, then it could be the heavy influx of people form form other states to Bangalore and some don't have vehicle so BMTC comes as a default mode of transport to all these people who are left without alternative .then there are the labor class of people who are dependent on BMTC again owing to its nuke and corner connectivity. these people are the ones who get highly benefited by the BMTC bus passes including the poplar daily passes as these are aggressively priced and allows one to travel in any bus on any route. this allows a lot of hop and jump from buses so that one can reach the destination faster. BMTC also rents buses to the corporate world for the transportation of their employees this has also ensured that they enjoy a steady income from these IT and non-IT industries. then there are few colleges and schools that make use of BMTC buses these arrangements are beneficial for both the BMTC and these educational institutions ensuring safe travel of the students using them . then there is the IT crowd that often makes use of volvos ensuring these volvos are doing good business and on weekends the volvo fares are reduced and this ensures that they are common man savvy on weekends so in this way they end up making good collections on all days , the volvos running on the airport route are too highly priced but there has been such a good connectivity of these buses from all corners of bangalore to airport that people have been using them over taxis and personal vehicles considering the fact that traveling to airport is a 40+40 km affair to many of us. for someone commuting on a domestic flight and ends up paying a UDF of over 300 rupees for using an airport that never seems to appear of an international standard it is worth to pay 150 rupees for an AC ride to home on these volvo buses which are on service round the clock. these buses are even decked up and ready to accommodate huge baggage if any so that one can enjoy a hassle free ride home, then major bus terminals of BMTC are spruced up and some even have malls and shopping complex(big bazaar's) in them to get money flowing into the organization through rents and lease and finally last but not the least there is this BMTC governing body that thinks that it is here to make profits, something which it feels it is entitled to, therefore any rise in the fuel prices is almost instantly passed on to the passengers pockets so that BMTC remains unaffected.


however there are problems faces by BMTC to looking at the point of view of a commuter the most primary would be " the Bangalore traffic". the word has had great influence in our lifestyles probably been a flagship word often used by many right from taking excuses citing it, to accounting for absence, late to work, etc etc traffic here has grown from bad to worse to even ugly( at few places) this would be the factor that sort of puts a tab on BMTC's growth.a commuter like me would probably have 2 options to get from one point to another. one would be a 2 wheeler and the other would be bus. further if i start zeroing on between the 2 then I'd start looking at the comparison between the fuel costs and the ticket costs that I'll incur. lets take an example: for instance a ride from my home to majestic bus stand which is the main transit point for any destination in Bangalore, it would cost me 10 rupees in a bus while it costs me less than 9 rupees on a 2 wheeler as the distance is around 8 kms and in the cases where I'd have a pillion rider I'd be able to save even more traveling by a 2 wheeler. but then someone like me( rather many like me) who's conscious of environment would still think let me contribute on my part by trying to reduce emissions by traveling through public transport. then there is the time factor which is very decisive in all our lives. a ride from my home to majestic takes 1 hour on an average on a bus and the same ride takes 20 mins on a 2 wheeler . this is something that many of us would'nt be in a position to compromise on. then there are factors like irregular arrival and departure timings of these buses which again lead to waiting and delays ,this is something probably no one has a control of considering that Bangalore traffic plays hues and cries at times making it next to impossible for these bus drivers to maintain regular timings , then there is a problem overcrowding of buses , some trivial factors like unfriendly drivers and conductors in some buses also play a role in making BMTC not so friendly for many of us.

A solution to these problems lies in taking of private vehicles off road to the maximum extent, this however is not possible by force nor is it not possible to ask all people to travel by BMTC which brings along with it so many disadvantages. the right solution is definitely in bringing up the metro in full fledged across Bangalore. this would by itself provoke a lot of people of Bangalore to give up their private vehicles and switching to metro. I'm sure even the IT managers who don't seem to think beyond their cars shall also consider traveling by metro, simple reasons being its clean energy , cheap , word class, fast and efficient. BMTC's on the other hand could act as feeders to these metro stations ensuring that they don't go out of business. both the BMTC and metro could be integrated and common passes issued that could be used in both the modes of transport. this shall definitely improve traffic situations and bring down the vehicle density in Bangalore that are currently on havoc mode. this shall also ensure that emission levels in Bangalore shall gradually come down and make way for restoring some of the lost glory's of Bangalore like trees and peaceful roads that are either diminishing and are practically non existent respectively. once this happens we could slowly concentrate on making good pavements on roads for walkers and also try to introduce cycling lanes for the people preferring it.


on a lighter note we have all experienced many things on a ride in BMTC buses be it silently hearing 2 or more people conversing loudly in the local language sitting in the bus, or the irritating guy loudly talking on his mobile phone and lying to the listener at the other end that he is malleshwaram while the bus is actually is in jayanagar, or the charming girl from the college in the front seat about whom we friends kept talking about , or the ride on the foot board feeling the wind and trying to alienate from the crowded bus inside or the sweet old school and college days where the conductor just used to keep yelling at us to remove the huge bag from the back and hold it on out hands and we simply wouldn't listen. probably many of us including me would have traveled to so many places in Bangalore in BMTC on a school bus pass that had an entirely different route and we were so confident that the conductor wouldn't check. these were some of the fond memories i shall carry over with me.
Posted by karthik at 12:20 AM