the sad tale of lalbagh and nanda road 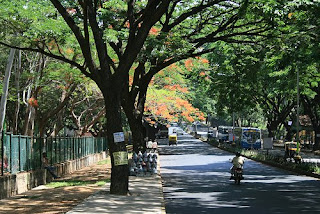 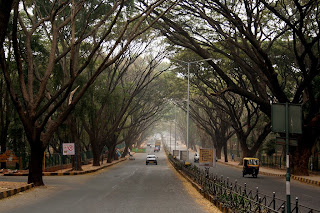 my heart feels very heavy when i think about the recent developments that have been revolving around the metro rail which has had gained so much hype and expectations in Bangalore.


suddenly i no longer regard metro rail which i thought meant a lot of pride for Bangalore as something not worth all of it. the recent spat of issues and controversies that it is bringing up makes me feel "is metro doing good or is it wielding an axe right into the heart of Bangalore ".
however i still strongly stand for having metro rail services inside bangalore but not at the cost of bangalore it self, metro doesnt have to alter the face of bangalore all together for what good it brings ,we are not ready to part with the identity of bangalore itself just to make it better.

now let me talk a little about Bangalore south , a place where I've lived all my life, a true place to be! dotted with beautiful wide roads ,parks ,shopping complexes,malls, the prestigious jayanagar extension that holds the pride to being the biggest locality in Asia , not to forget lalbagh that upholds the very definition of Bangalore being called a garden city .an another road that i want to specifically mention is the road between south end circle which stands as a gateway to jayanagar locality and ending at sangam circle which marks the end of this huge locality. the road might approximately be about 2-3kms long and it has parks and service roads running on either side of it , the road is dotted with trees on either side and there are indeed so much of trees that all through the stretch of the road one cant see any sun and can flawlessly travel in the cool shade of these trees which are over 50 yrs old. i would easily be tempted to call it one of the most beautiful roads Bangalore has. the place is so calm and shady that few years back the organizers chose this road for the bicycle race for the 4th national games which Bangalore hosted. this road is popularly called nanda road as the nanda theater which once existed stood on this road , however it was pulled down recently to make way for a better building. some of the specialties about these theaters were they always showed Kannada movies which were better some time back and they offered tickets at rock bottom prices . me getting accustomed to these theaters found it really hard to shell out those extra bucks with the advent of multiplexes some time back

now coming back to where we started, the metro rail project. it feels very painful to digest the fact that the metro rail cuts throughout the nanda road(which is a good thing however ) and the cost that that it comes at is a massive 323 trees being felled on nanda road and on lalbagh to make way for the metro. these numbers are not something that we can ignore in the name of development. it might be easy to say the same simple mantra of the bureaucrats that for every tree felled we shall plant twice the number of saplings but that is far from reality to imagine those saplings growing into trees which alone takes several decades and the amount of effort it takes to nurture them is a huge task.

of course any illogical developments comes with an opposition in the form of protests which the residents have taken up, however little heed has been given to their protests and the metro work has been sailing through practically ignoring the suggestions of the people who actually use it in the future. there have been a lot of suggestions that has been coming from people that the metro should go underground when it comes to saving trees which i feel is totally justified . it may be true that for places where metro should go underground the cost escalates by twice or thrice which should not be a problem . protecting the heritage and the greenery of Bangalore should be our principle agenda , and as far as the increase in the cost for the metro can always be recovered by charging a rupee or two higher in ticket prices

citizens of Bangalore have always appreciated quality infrastructure development and have always paid higher money to use them. some of the live examples that i can recollect are NICE road with toll for every 5-10kms, the ride from BIAL to Bangalore on a Volvo buses that costs a whopping 150 rupees but still ends up making fair business. these are very few among the many such examples

the citizen of Bangalore shall welcome metro in full pride and would proudly use these Eco friendly transportation and he shall definitely be more than willing to pay an additional fee for the ticket rather than see a green and calm nanda road go fully barren and huge pillars of metro rail along it just to keep the cost low in building the metro, this is something people would never wish to see .....

now it is for the authorities to re align the plan and re shape the path of the metro cos its never to late to do something good and positive. i just hope they start working as soon as possible to make the metro a real winner.

i would also like to quote one famous line here